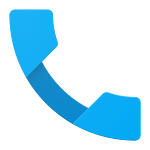 In March 2016 we finally enabled, after some testing with the Play Store version, the Google Dialer as an optional extra. Using the DialerGoogle keyword users could install with the dialer to experiment on their device. The feedback from users was that on Nexus devices it worked, but on almost all non-Nexus devices there were problems. But even on Nexus devices, it was obligatory to manually set Google Dialer as the default Phone app, otherwise the device would reboot when making or receiving a phone call.

DialerFramework is only installed on white-listed devices, currently this white-list only includes Nexus Devices. You can override the white-list using the forcedialer keyword.